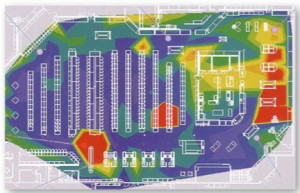 The average shopper passes through less than half of the aisles in a typical grocery retailer. Obviously, products in the remaining store cannot be part of the final basket. Even if the shopper had no plans to buy, many categories’ sales rely on people accidentally passing by: for example, more than 50% of yoghurt or coffee sales are unplanned.

A recent article in the Journal of Marketing shows that many categories benefit from the fact that people are not efficient in their shopping: On average they cover at least twice the distance they would need for their planned purchases – and the higher this extra distance the higher the unplanned purchases. Any extra ten percent of travel distance increases unplanned spend by about 15% ($2.50 in that study). Smart placement of just three promotions forcing consumers to travel more can increase unplanned spend more than 50% – a strategy which is particularly promising (or worrying?) in times where shoppers’ exact in-store locations can be identified in real time.

Getting it wrong with Eco-Actives will be costly

Shoppers have clear intentions to be sustainable

Sustainability is an even more important influence on shoppers

Even Heavy Buyers Will Stop buying next year

Shopper needs waiting to be addressed