This week we naturally concentrate on Covid-19

Here we see some of the initial impact on FMCG in Europe and as expected the signs of at least a short term boost to FMCG due to panic buying. Based on other crises in the past such as SARS and H1N1, we would expect these to drop back and then level off over the next few months. 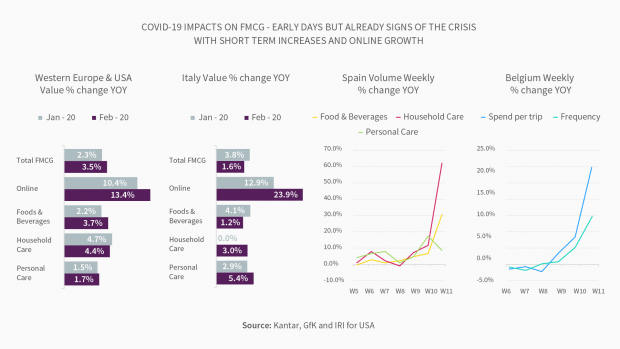 With regard to panic buying – “I heard about it on the news, so I bought an extra 15 rolls” It does not take a real crisis to create a shortage in toilet paper. A 1974 article in the New York Times reports how supposedly higher paper exports resulted in a warning about potential paper shortages that were spread (slowly first, quickly later) by news programs and late night TV. Once consumers increased their buying rates, the rumor became reality – distribution was not able to cope with the surge in demand. No surprise then that with today’s social media such rumors trigger hoarding at unexpected scales.

Environmental concerns and how brand communication should vary by country

What the top dogs get