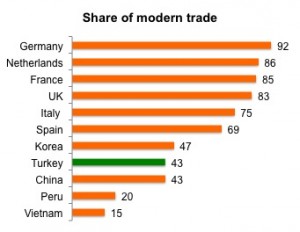 he Turkish retail landscape is characterised by a mix of traditional open bazars, specialist shops, small grocery shops and modern supermarkets. Traditional retail channels still account for 57% of total grocery spend – with the exception of Istanbul, where modern trade owns a majority of the market.  Compared to Western countries like the UK and France shoppers in Turkey shop for groceries almost daily (UK: 5 times a week; France 2 times a week).

The BIM chain that has opened almost 5,000 stores over the past 20 years follows the Aldi or Lidl logic: small assortments (600 SKUs) dominated by PL (72% of sales). Considering that half of the Turkish population is currently under 30 years old, it seems a safe prediction that modern trade (not just discounters) and e-commerce will grow share in the coming years.

How has the pandemic effected shopping behaviours around the world

The issue of wish-cycling

Who rules the portfolio animal kingdom?

Price War – Love it or Leave it