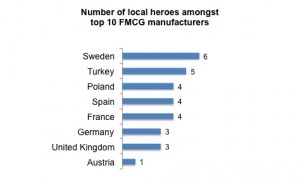 Our last blog entry showed that across eight European countries the top ten manufacturers are responsible for just below half of total value sales across some 80 large FMCG categories. The analysis is restricted to top ten brands of which the top ten players only own 20%.

While the retail landscape in most countries is dominated by local banners, the manufacturer landscape boasts more players who are present in many markets. Two European manufacturers are among the top ten in each of the eight countries and three US manufacturers rank in the top 10 in 7 out of 8 countries. Sweden has the highest number of local heroes (6) in the top 10 – manufacturers who have their headquarter in the respective country – followed by Turkey with 5. In comparison, only one local manufacturer is present in the top 10 in Austria. Whether the location of the manufacturer’s headquarter is an important criterion for consumers to assess whether a brand is local, is questionable: Many internationally owned brands are still marketed as symbols of local pride (e.g. Walker’s Crisps, Algida Icecream, or Beck’s beer).

Getting it wrong with Eco-Actives will be costly

Shoppers have clear intentions to be sustainable

Sustainability is an even more important influence on shoppers