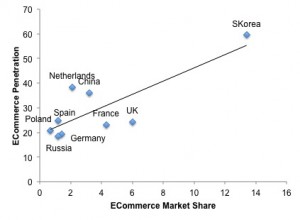 Grocery E-Commerce reach differs widely between countries in comparable  stages of their retail development. While 6 out of 10 South Koreans purchases online at least once per year, only 1 in 4 French or British households or 1 in 20 Italian households chooses grocery on the internet. This underscores the impact that more (or less) retailer promotion of this channel has a huge impact on the trial rate of consumers.

Also, similar penetration rates do not result in similar shares: the proportion of online shoppers in Spain is the same as in the UK, but their online buying accounts for only one fifth of the UK share. This is an indication of substantial differences regarding size of shopping trip, categories bought and frequencies by country.

How has the pandemic effected shopping behaviours around the world

The issue of wish-cycling

Who rules the portfolio animal kingdom?